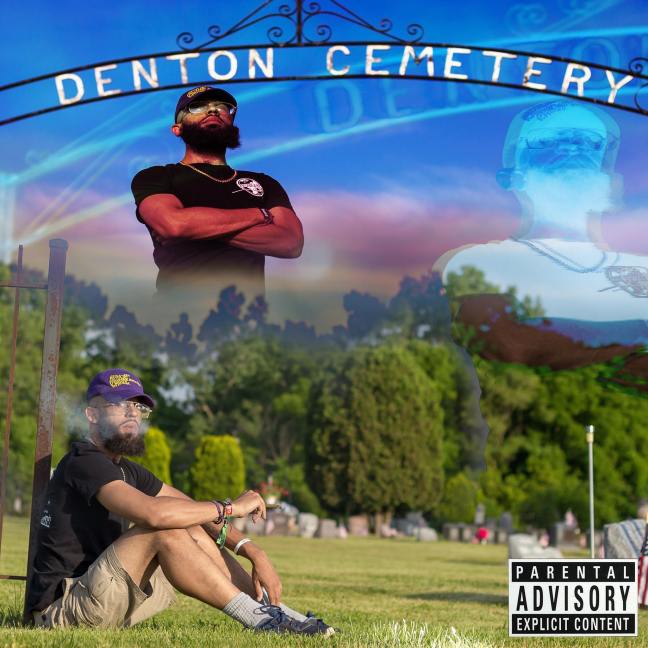 Around fall of 2016, I’ve made the decision to move to Ypsilanti, Michigan to focus on my career in journalism. Over the past year in a half, I’ve managed to get familiar with the music scene in the area and network with musicians, bar owners and promoters from many different backgrounds on different events, as well as my own music. A few months back, I decided to check out an open mic hosted at W. Cross Station (formerly crossroads) in which Ypsilanti based artist, Drew Denton was in attendance. Fast forward to June 30, 2018, Drew Denton released his long awaited album entitled, “Denton Cemetery” and we had the chance to catch up with him for an interview at W. Cross Station at his release party. Many featured local acts such as, Black Alfalfa, Team Stack, Scumbag Frew, Wicked Jake and many more were on the bill for the event. 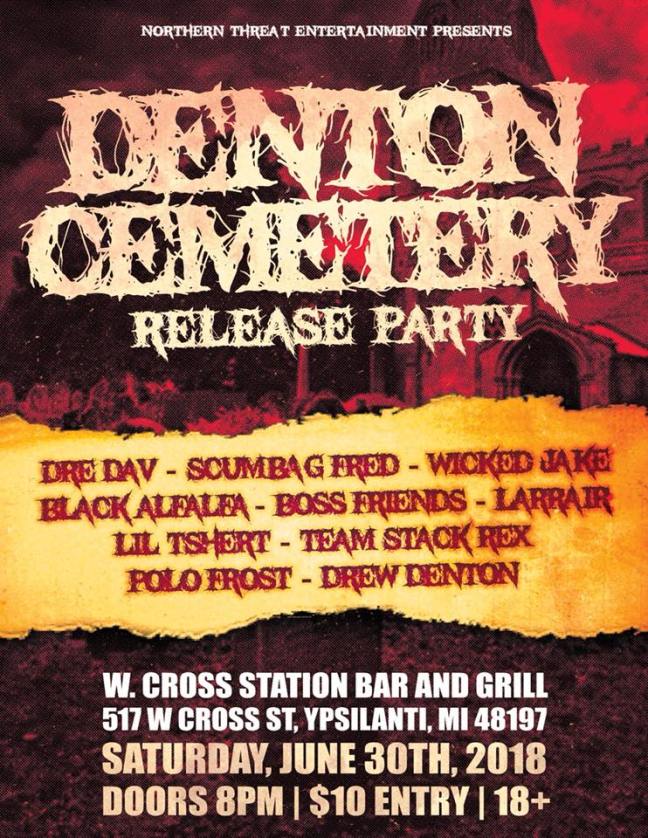 “Denton Cemetery is about me laying down alot of my demons, a lot of negative shit that happened in my life just kind of putting that shit on blast so I can move past this person. It’s real high energy music, very metal and dubstep influenced produced my me and a couple other homies that I have; it’s really like the crem de la crem of my music. I finally found my sound and that’s what Denton Cemetery is about.” Drew responded when asked about the thought process and mood that went into making Denton Cemetery. As a person that has his hands in a lot of different avenues between being a journalist and artist, I’m always curious to see how other artist got their start.

“I’ve been on this shit since I was 10, I started playing the recorder in the 4th grade, was super accelerated off that, as dumb as it sounds. From there I moved to clarinet, then bass clarinet, then I said fuck band because that shit was nerdy and picked up a guitar, I had a band for a minute, we played one show, a white stripes cover of Seven Nation Army when I was 13 then we broke up. At 14 or 15 I started making beats and it was, everything else kind of happened from there.” Drew responded when asked on how did he get his start into music.

Drew Denton is Part owner of Northern Threat Entertainment, an event company that specializes in throwing parties around the area. “Northern Threat is a collection of my super close homies, we’ve been throwing parties since my momma’s house back when I was around 14 or 15,  so, we just wanted to make it more professional. We want to bring out the best artist we can get our hands on from around the area and just throw bangers. It’s all about love, positivity and bringing people together from different walks of life.” This spawn events such as 734 Saturdays which takes place monthly at Ziggy’s lounge in downtown Ypsilanti. Another aspect of Drew Denton’s creativity is music collective Approachable Minorities, which is comprised of Drew, Lewy Seifer and DJ On Demand. “We’ve all know each other for damn near 15 years, we were in bands together, partying together and hanging out together and just been making music the whole time. Approachable Minorities was just like a joke at first, I use to have a wild purple beard with glasses,  a good friend of mine came into the studio one day and I shaved my beard and he said, “you’re looking like a real approachable minority right now.” Ever since then the name just stuck.” Drew responded on the origin of Approachable Minorities. “You never know when you’re going to be the minority in a situation, you could be the one white dude in a room full of black people, the one punk rocker in a room full of rappers, so you never know when you’re going to be a minority so you might as well put a smile on your face and be approachable and get to know people.” Drew continued.

Drew cites a range of different artist for the influence on his sound. Artist such as Detroit rapper, Danny Brown is one of his biggest influences. He cites acts such as Death Metal band,Job For a Cowboy and EDM act Bassnectar is an influence on his production. 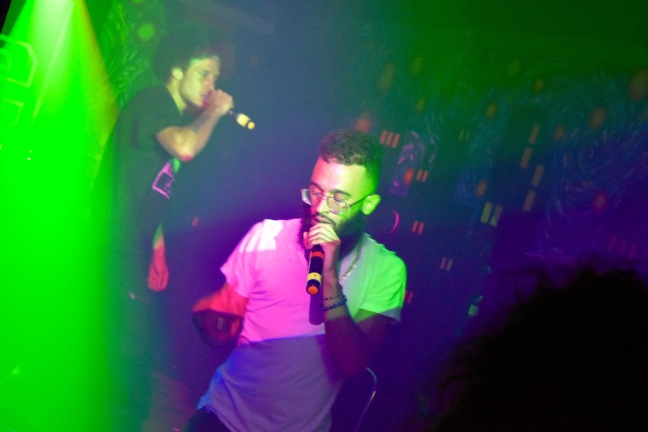 I’m going to keep making music,  keep doing this shit till the wheels fall off and keep living my life. I came from a real dark spot a few years ago and almost gave up everything, so right now I’m just trying to push it and that’s why I peaked this year and that’s what let me know how finite life is, you just gotta live that shit to the max. Fuck anything anyone else is trying to get you to do, you only got one life. Everyone’s gonna try to get you to do what the fuck they want you to do, fuck that, with respect to everyone else.” He responded on his plans going forward.

In addition to Interviewing Drew, I had the opportunity to get a interview with Rex from Team Stack as well.

“Just growing in around music, Three 6 Mafia, Jeezy, just grew up around the trap shit really, just the same shit I did. Doing music, it turned into merchandising, turned into CD’s and it turned into a different outlet than just selling dope on the corner. Rap shit came with bad bitches and legal money.” Rex responded when asked what got him into music.  “We about promoting good music, good fucking DJ’s, good producers, just good vibes man.” Rex continued. Rex is a Michigan native, but credits his the sound in his music from artist such as Jeezy and Gucci Mane. “This shit is fun bro, i do this shit for everyone else around me. If it comes with money I’m into it, been rocking shows in Ypsilanti, Detroit, I’ve been doing this shit for years.” Rex responded about what’s next for his music.  “It’s a Michigan movement right now, we need to unite these Michigan artist and go abroad.” Rex’s manager added.

I had the chance to catch up with a few other artist around the event that will be covered in later interviews. Make sure to check out Denton Cemetery, available now. Personally, my favorite track off of the album is track 7 entitled, “Big Bank” but, you should take a listen for yourself.